When I got invited on a trip to Temptation Resort, a “topless-optional, adult-themed” all-inclusive Cancun resort, I assumed they had the wrong person. The invite, celebrating the resort’s grand reopening and redesign by Canadian designer Karim Rashid, had been offered based on my recent writing. While I spent my twenties writing about sex and relationships, I’m now a thirty-something single mom of a two-year-old, more interested in sleep schedules, car seats, and playgrounds. And by playgrounds, I don’t mean the “playground for grown-ups”  alluded to on the Temptation website, which touts a “sexy pool,” an aphrodisiac restaurant named “She,” and a club called Bash. It wasn’t until I brought the invite up with another set of toddler parents that I seriously entertained the idea of going.

“Go,” the wife said, eyes wide, the hint of a smile dancing on her face as she lowered her voice so our kids couldn’t hear us. She and her husband had gone when their son was one year old, and as they told me about the spark it brought back into their marriage, including a sexy dalliance they had with another couple, I was, well, tempted.

I was more than tempted, I was turned on. And at the very least, I’d be in Cancun just as New York City was experiencing its first cold snap. Why not? Did I mention I also decided to take this trip during a month when I’d given up drinking? What can I say, I like a challenge, and my challenge was to see if Temptation could get me out of my overworked, overstressed, toddler-mom-rut and bring me back to my twentysomething self.

What does one wear to a sexy resort? None of the options in my closet seemed right. While my daughter and I spent last January in Costa Rica, I had spent my days in surf-appropriate athletic bikinis and yoga gear. The only thing I knew was the dress code for the grand reopening party: sexy white. With that as my only guideline, I went online for inexpensive sexy adult-themed outfits (keywords: cheap, white dress, sexy). At the end of my shopping spree, I panicked and tossed a few containers of body glitter in my virtual cart at the last minute. Why not? I threw a few bikinis in my bag, and I was ready to go. The best part: Packing for a topless-optional resort means you can definitely just bring a carry-on.

As soon as I checked in, I stepped onto the patio, squinting down at the sexy pool. Even from five stories above, I could definitely see boobs. I crossed my arms across my chest. I’ve never been shy, but everyone I had seen in the lobby was part of a couple. I wasn’t sure what to wear, how to interact with people, and how one acts at a “sexy resort.” Finally, after an hour of psyching myself up, I pulled on a bikini and a cover-up, and ventured out.

“I like your dress,” a woman said in the elevator. I stiffened. Was that resort code for “take it off?” While a culture of “no means no” reigns supreme throughout the resort and boundaries are respected, I had no idea if people were just being polite or if any conversation was an overture to  … something.

“Thanks!” I squeaked as I raced to the sexy pool. Ignoring the sea of bobbing breasts of all shapes, sizes, and plastic proportions, I swam up to the bar, asking for a blue drink like the one the sunburned woman next to me was drinking.

“Only without the alcohol,” I said.

“The blue is the alcohol,” the bartender said, looking at me like I was an idiot.

Everyone stood in clusters of four or five. I overheard snippets of conversation; one man was annoyed because the water in the redesigned sexy pool was now at chest height (before, it had been waist high—you can imagine how the change affects the view at a topless resort). I left the sexy pool unsatisfied, pulling on my dress and heading into the Mexican restaurant, Amores, where I spotted several other solo people through the tinted glass windows.

Feeling a rush of bravery, I asked if I could sit down. Turns out, these individuals were other journalists here to cover the opening, also feeling just as much a fish out of water as I was. 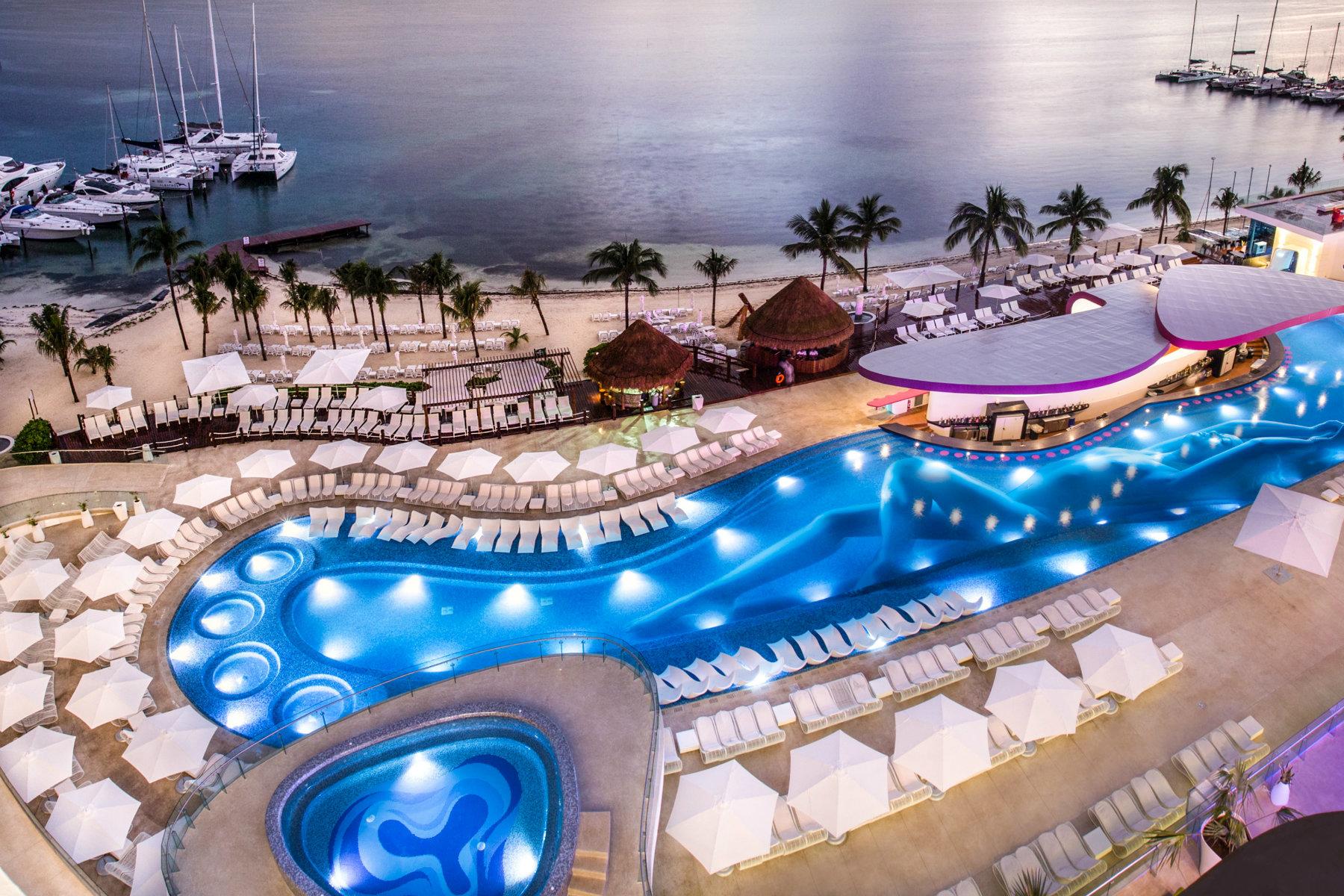 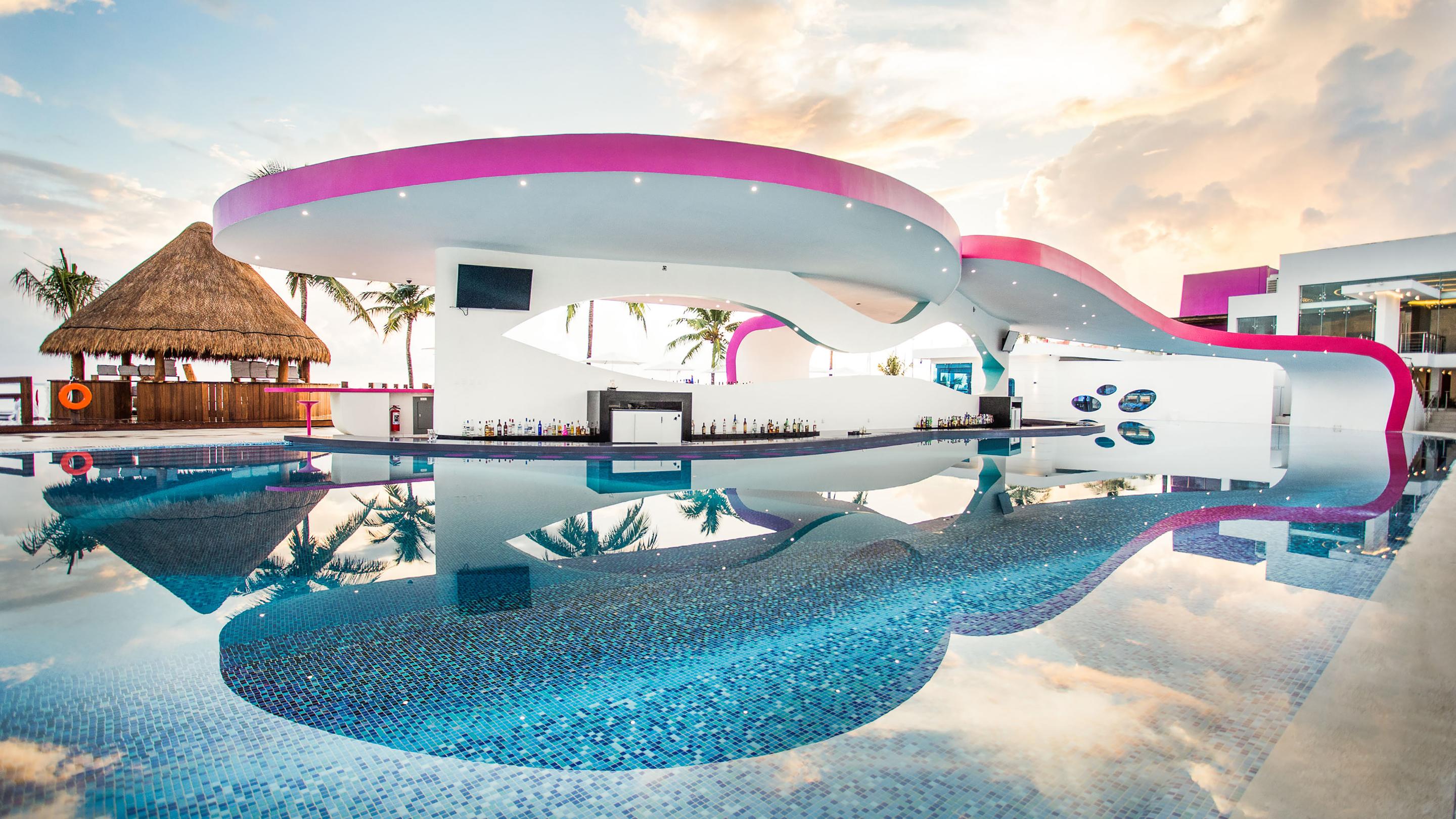 And suddenly, with my newly found group of five, my confidence skyrocketed. That night, as fireworks lit up the sky at the relaunch party, I realized: I am by myself in a foreign country. I have access to a buffet of food I didn’t have to prepare. I can do whatever I want. I felt free.

And that was the point. For me, while I welcomed motherhood, I assumed it meant certain things were out of my life forever. But it took Temptation Resort to remind me there’s no reason I can’t go solo to a foreign country, that I can’t be the sexy, independent, try-anything-once woman I used to be. The feeling was the same as I felt the first time I went to summer camp as a kid and was given permission to walk a mile down the camp road to the general store with my bunkmates. I had freedom, including the right to stay up all night and eat whatever I wanted from room service. I was lusty for freedom. Who cared about an affair?

As the night went on, I began to see my new friends as partners-in-crime. At the white party, I spotted a woman in a red dress and started a rumor that her outfit had been chosen to protest the Karim Rashid redesign of the hotel. It wasn’t true, but it was hilarious, especially when the rumor made its way back to the woman. Later that night, our group ditched the party in favor of a mountain of room service and a never have I ever session on an oversize king bed. By the end of the night, these new friends knew more about me than friends I had known for years back home.

The next day, I took my own top off, allowing my chest to enjoy the Caribbean breeze. And, as I found myself dancing nearby (but let the record show, not on) a stripper pole at Bash on my last night, I realized, Temptation was exactly the break I had needed—but not the one I had ever anticipated. I felt free—and free to not try to start a fling just because I felt I was supposed to. In fact, most people who go to Temptation go as a couple and don’t swing at all, even though they may engage in flirtation with others. The entire vibe is low-key and low stress, a do-what-you-want attitude where it’s totally okay to spend the entire day jumping from all-you-can-eat buffet to all-inclusive restaurant.

Is Temptation Resort cheesy? Yes–but that’s exactly the point. What I hadn’t realized just a week earlier when I was earnestly buying lingerie online to try to fit society’s expectation of sexy is that the people who went to Temptation, and came time after time, were all ages, shapes, and sizes, and they didn’t come for an Eyes Wide Shut bacchanal—they came to shed expectations and just enjoy the moment.

“This is the only place where I feel accepted,” one man told me as we blithely watched a group nearby slurp up “wet p***y” shots. “Everywhere else, people would see me as a fat man on the beach. Here, they actually care who I am.” His honesty and vulnerability made me feel small-minded for what I had assumed Temptation would be and made me determined to actually talk to people, rather than just hope people talked to me.

There was the couple who had been married for thirty years who came twice a year; the pediatric oncology nurse who goes to the gym at 5 a.m. every day to be in Temptation shape, the twentysomethings who decided to come as a bachelorette party. By the end of my three days, I was even invited into a private Facebook group for the “party people” of Temptation resort, a true sign of my social success. I still have a text chain with the friends I made. But most of all, I feel more comfortable in my own skin and own life, knowing there’s a sexy(ish) Shangri-la in Mexico where I can escape everyday responsibilities—if only for a long weekend.

Oh, and when I got back home, the couple who had talked me into going to Temptation texted to tell me they had gotten it wrong: They had been to Desire, the sexier cousin to Temptation, where exhibitionism is allowed, where bottoms are optional, and it’s a lot easier to find the fling I had set out for. But honestly, even though I went to Temptation by accident, I couldn’t be happier at what I found—an environment where I finally could let go of goals, to-do lists, and plans and just go with the flow.

10 Crazy Secrets of the Valley of the Moon in La Paz, Bolivia

In This Chinese Village, People Carve Intricate Artworks on Olive Pits for a Living

I Was on A Flight That Turned Into A Game Show

Send To A Friend